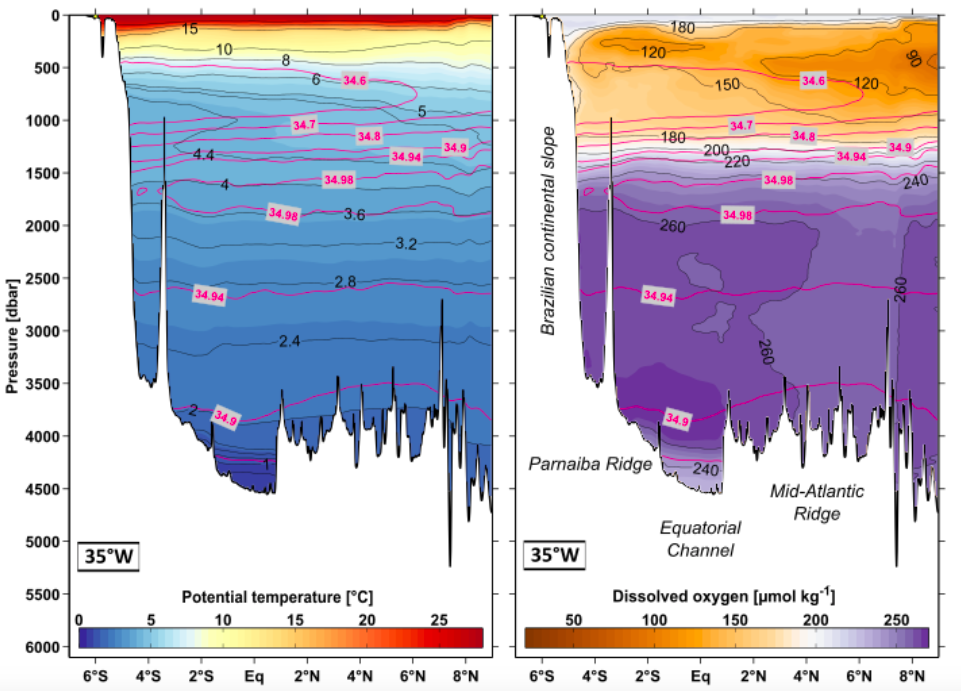 Figure 1: Mean distributions of temperature and oxygen (salinity is overlayed in magenta) along the 35°W meridian –from the Brazilian coast northward. These sections represent the average of 12 previous cruises (1990-2004) along this route and nicely show the different patches of properties characterizing different water masses (Herrford et al., 2017).

On board of the Research Vessel Meteor, we are currently sailing through the western tropical Atlantic. This region is particularly interesting for me, Josephine Herrford, and other oceanographers, as it represents a crossroad for different currents transporting water from all kind of remote regions around the globe. In oceanography, “water masses” are a fundamental, but also sort of an abstract concept. Atmospheric conditions like precipitation, temperature or winds influence the characteristics of water at the ocean surface. In certain regions, this leads to the formation of dense waters, which – being heavier – have to sink down and stratify themselves according to their density. As soon, as those waters leave the surface, we assume they behave like enclosed volumes, keeping the characteristics imprinted on them at the surface. These “packages” or “water masses” are typically captured by the currents and then transported away.

In the western tropical Atlantic off Brazil different currents and water masses meet: In the upper 1000 meters of the water column, salty water masses coming all the way from the Indian Ocean encounter really fresh water masses formed in the strong Antarctic Circumpolar Current. At deeper layers, enormous volumes of highly oxygenated waters formed in the North Atlantic sandwich in above the coldest and densest water of all oceans formed on the Antarctic shelf, both creating an abyssal stratification.

After working on that topic for a couple of years now, I am still fascinated by the scales: Some of these water masses have been isolated from the surface for several decades, just travelling through the ocean and interacting only a little bit with other water masses or the topography. Some had to travel ten thousands of kilometers until they arrived off the coast of Brazil. Some make up 20 – 30% of the global ocean volume. The coldest waters formed around Antarctica, for example, have been found to fill all abyssal planes of the Southern Hemisphere. And, we oceanographers can come to this special region  with a ship, lower some sensors attached to a CTD (conductivity-temperature-depth; see figure 2) on a rope down to 4000 to 5000 meters depth and look at the measured temperature or oxygen distributions (see figure 1). With this – also fairly old – technique we are able to recognise all of the water masses mentioned above as well as to infer their origins.

2 thoughts on “The Western Tropical Atlantic, a Meeting Place for Waters Coming from Different Regions all Around the Globe”