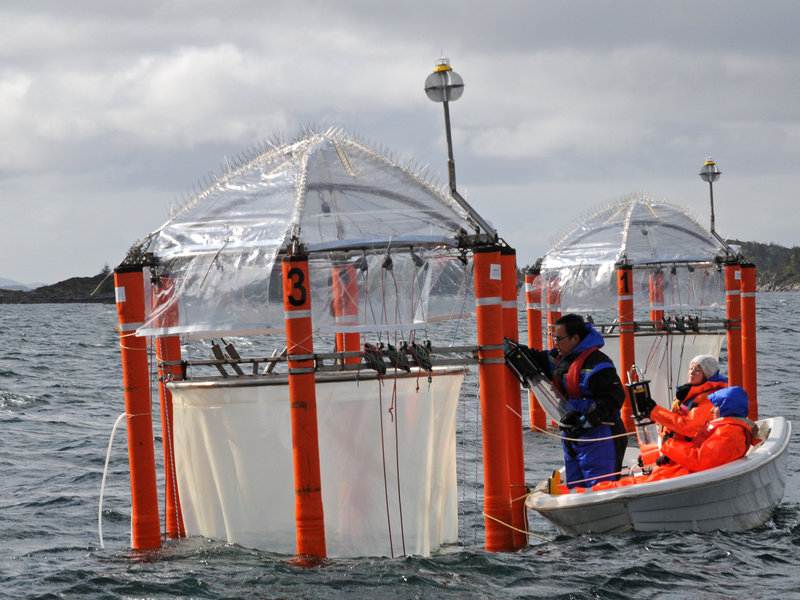 21 July 2015 / Bergen, Kiel. In a two-months long experiment in Norway, scientists from GEOMAR Helmholtz Centre for Ocean Research Kiel investigated how ocean acidification affects the plankton community and material fluxes within the marine food web. Their observations confirm that positive and negative effects have to be expected. Among the losers are the sea butterfly Limacina helicina and the calcifying alga Emiliania huxleyi. The gelatinous zooplankton species Oikopleura dioica and the tiny pico-phytoplankton, however, benefit from increased carbon dioxide concentrations in the sea water.

Eight mesocosms, 36 researchers, 50 sampling days – and one major step ahead in the understanding of ocean acidification: From May to July, a team of scientists led by GEOMAR Helmholtz Centre for Ocean Research Kiel investigated at the Raunefjord in Bergen (Norway), how the marine community responds if the ocean gradually acidifies due to the uptake of carbon dioxide (CO2) from the atmosphere. “Our study was exceptional in many aspects, and we are very satisfied with the outcome and our data,” Professor Ulf Riebesell, professor of biological oceanography at GEOMAR and coordinator of the experiment, concludes. “None of the previous studies has revealed as clearly as this one how interactions within the food web determine the sensitivity of the plankton community towards ocean acidification.”

For their experiment, the researchers used the KOSMOS mesocosms (KOSMOS: Kiel offshore Mesocosms for Future Ocean Simulations), floating experimental facilities with a capacity of 55,000 liters each. Four of the mesocosms were brought to elevated carbon dioxide concentrations. Regular samplings and analyses then showed how the community enclosed in the mesocosms evolved.

To test whether the world’s most important single-celled calcifying alga Emiliania huxleyi can adapt to ocean acidification through evolution, individuals that had adjusted to survive under more acidified conditions over 2,500 generations in the laboratory were inserted into the mesocosms. The scientists’ focus was on the question of whether adaptation achieved in the laboratory enables the alga to prevail within the natural community in more acidified water and to compensate for the negative impact of ocean acidification partially or completely. The current study does not allow for hope: Evolutionary adaptation did not save the calcifying alga from elevated loss rates and lower population densities under ocean acidification. Emiliania huxleyi plays a crucial role for the transport of carbon to the deep ocean – and thus for its ability to store carbon and mitigate climate change. Also, these calcifying algae produce the climate-cooling gas dimethyl sulphide (DMS).

Another loser will be the pteropod Limacina helicina. The “sea butterfly” builds its shell from aragonite, a type of calcium carbonate that easily dissolves. It is an important food source for fish, marine mammals and seabirds. “If the pteropod suffers from ocean acidification, an important link within the food web might get lost”, Dr. Silke Lischka, marine biologist at GEOMAR, explains. “Results we have evaluated so far give a clear picture: With increasing ocean acidification, Limacina will find it more and more difficult to survive in its ecological niche.”

On the other hand, the experiments have shown that some species might benefit from ocean acidification. Apart from the tiny pico-phytoplankton, also the larger zooplankton species Oikopleura dioica responded positively to higher carbon dioxide concentrations in the mesocosms. This observation is in line with both previous laboratory scale experiments and larger mesocosm studies using the land-based experimental facility at the marine station of the University of Bergen. “Oikopleura dioica is an abundant planktonic tunicate with global distribution. It lives inside a complex gelatinous house that also allows it to capture of a broad variety of food particles down to 0,2 micrometers”, Jean-Marie Bouquet, research engineer at the Sars International Centre for Marine Molecular Biology and PhD student at the University of Bergen, explains. “Oikopleura has an important role in marine ecosystems and is noted for its ability to rapidly expand population size in response to favorable conditions. In this way, large populations can develop, and they have the power to change the whole food web around. This is exactly what was observed in the acidified mesocosms.”

The scientists’ data and analyses cover the entire community from the tiniest to the largest plankton and fish larvae as well as material fluxes and interactions between the different levels of the food web. “Since we measured a total of about 50 parameters and because many analyses can only be carried out in our home laboratories, the evaluation will take a few more months”, Prof. Riebesell announces. “But then we can join findings from various fields like a puzzle and interpret them altogether.” It is already clear that increasing ocean acidification will influence biodiversity, the food web and the material cycling in the sea. How serious the effects will be and to what extend humans will be affected, depends largely on how far we are able to cut carbon dioxide emissions.”