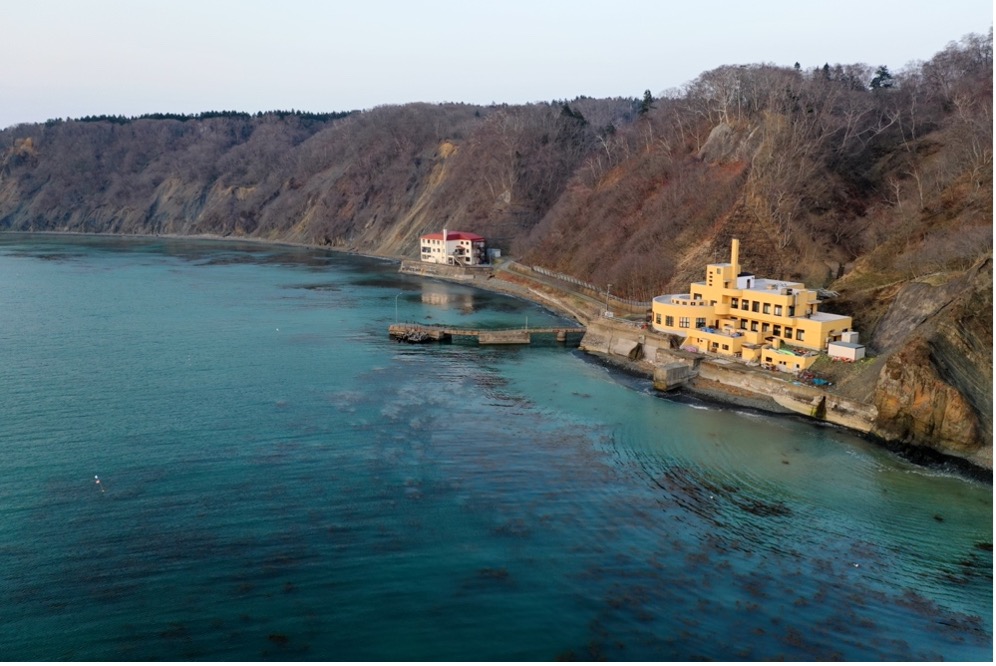 こんにちは！ is a Japanese greeting which means “Hello”.

I am Chikako – this years’ GAME participant from Japan.

Unfortunately, this year, I had to form a team on my own, just like my GAME colleague Leonard did in Malaysia. Due to covid restrictions, Sarah, my initial team partner from Germany, was not able to travel to Akkeshi to conduct the experiments with me. Therefore, a new study site needed to be identified for her so that she could conduct the data collection for her thesis. After much back and forth, she finally went to Husö in Finland, and few weeks after that I received a parcel full of materials for my experiments from GEOMAR.

Before I start with describing the set-up, let’s have a look at my study site. It is located near Akkeshi which is at the southeast shore of the Hokkaido prefecture. Although, we usually have relatively little snow, it is cold here throughout the year. In summer, sea fog is very typical and sometimes I lose my orientation due to the dense fog.

Akkeshi is a small port town with around 10,000 inhabitants and you can feel the power of a spectacular nature there. On my way to our research center, which is outside town, I often run into wild deer and foxes. This spring, the area in which the research station is located, was newly designated as a National Park.

We do not only have many wild animals but also a unique geographical feature: the Akkeshi lake which is connected to the Akkeshi bay. This shallow lake is brackish and it is used for the aquaculture of Pacific oysters and littleneck clams, which both play a major role in the local seafood production. The lake is also an important spot for migrating birds, and you can see a lot of beautiful swans there during winter.

This area offers various environments to wild creatures, and it has an astonishing biodiversity. For example, Daikoku Island, one of the small islands near the research station, is an important breeding spot for harbor seals.

The Akkeshi Marine Station (AMS) is located close to the entrance of the bay just beneath Aikappu Cape. From there, we can easily access the ocean as well as the forest behind the buildings. This makes it an ideal and beautiful location for biological fieldwork.

Now that you know where I have been during this summer, let’s proceed to the lab. As I said, I received all the necessary equipment in a parcel that was sent from Germany. What was the next thing to do? It was time to find a test species! I decided to work with a sea urchin, Strongylocentrotus intermedius, which is abundant near my lab. It is a common sea urchin species that is also used as a fishery resource in Northern Japan. The sea urchins have relatively short spines and live at the rocky sea floor in the intertidal and subtidal zone. They usually attach their bodies to rocks firmly by using their tube feet so that they won’t be washed away or picked up by predators. However, I could easily collect these well-defended grazers from the sea floor in a subtidal area by scuba diving.

Finally, the lab set-up was ready, the animal collection completed and I started the experimental work with pilot study in June. The plan was to use red light LEDs, which would allow to take pictures in the dark, so I had to check whether the sea urchins I wanted to use for the experiments are sensitive to red light. For this, I compared food consumption rates between a group of animals that experienced red light during night and a group that experienced natural darkness. There was no difference between these groups and I concluded that the sea urchins are insensitive to red light. Thus, I could start with the main experiment as planned.

However, I came across some unexpected problems during the pilot study. For instance, the algae pellets, which I produced as a food source for the sea urchins, were too light and therefore tended to float around in the aquaria. This problem had to be solved to allow the sea urchins to feed on the pellets. I changed the ratio of water to agar agar in the pellet recipe, the shape of the pellet and some other things but all this did not help. Luckily, I found a solution in the end. I fixed the pellets to a weight. In this way, the pellets stayed on the bottom of the aquarium.

With all problems solved, I finally started my first main experiment by the end of July. I acclimated my test animals to the different light regimes for two weeks and this acclimation period was followed by a 24 h long measurement period during which I assessed consumption rates. In total, the first experiment took about one month. Since the beginning of April, all GAME participants had a Zoom meeting once a week and shared progress and doubts. To tell the truth, I felt a little anxiety every time when I saw the faces of the other teams, since I didn’t had a team partner. But I got a lot of help from my supervisor Prof. Masahiro Nakaoka and other staff members of the Akkeshi Marine Station, and so I managed to collect the data for my first experiment.

As a result of my first experiment, only subtle differences in food consumption rates emerged between the three light treatments. I decided to follow other teams who had results similar to mine. I therefore, in my second experiment, had the same light intensity and the same light regimes, but this time without an acclimation phase. In this way, the experiment took less time than the first one, and I could finish the experimental work in early October. At the end of the experiment, I was feeling restless about the analysis course in Kiel. Since the covid situation at that time was still unpredictable, I was happy to hear that I am allowed to travel to Germany and to participate in the course.

Now, since mid of October, we’re all together at GEOMAR in Kiel. We are learning a lot about statistical analysis, scientific communication, and of course about the six different cultures that met in this GAME project. The current covid situation in Germany doesn’t look good, and I hope everyone will stay safe until the end of the course on 17th December. But for now, we continue our adventure in this lovely port town (with maximum caution for the pandemic)!

Thank you for reading!

One thought on “”こんにちは” from Akkeshi in the northeast verge of Japan!”