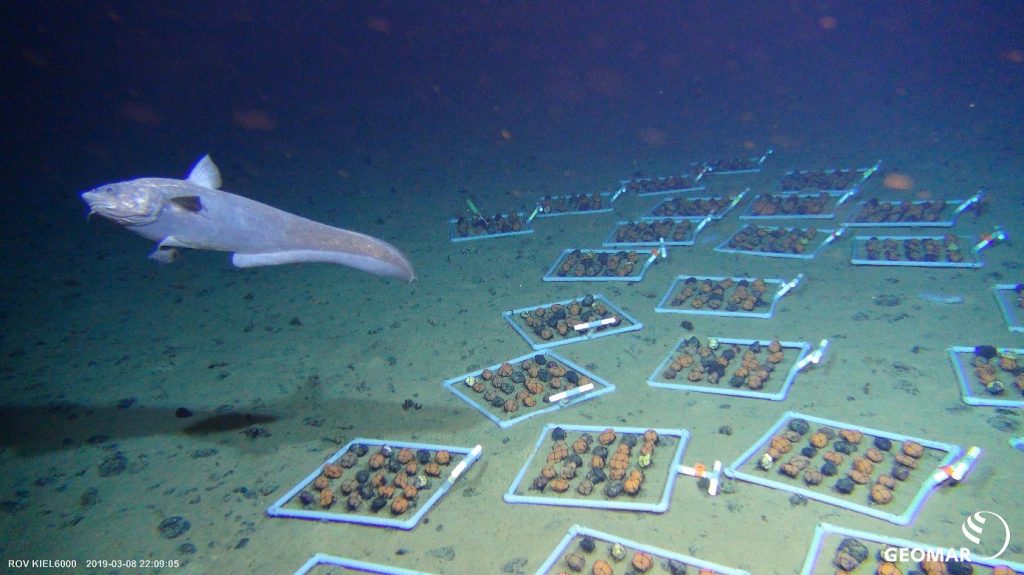 The growth of the global economy and technological development is increasingly leading to scarcity of certain metals essential for the high-tech industry. Many countries including a number from the EU are currently exploring the potential of deep-sea mineral resource exploitation as a viable alternative to the raw materials market on land.

Mining will cause multiple disturbances and stressors for the animals living in the deep sea – one of it is removal of the nodules. Nodules offer a habitat to animals such as sponges and corals that need hard substrate to grow on. Smaller animals, not visible with the naked eye also live on and inside the nodules.

Nodules will regrow very slowly, only several millimeters per million year. After mining, animals that strictly need the nodules to live on will not be able to return to the mined area for a very long time – thousands or millions of years. It is therefore very important to characterize and quantify all fauna living on and inside these nodules to be able to estimate the types of animals that would be lost for such a long time in the mined area. Coral Diaz-Recio Lorenzo is currently on board the Sonne, using the boxcore to sample natural nodules.

Night shifts for boxcore deployments to collect nodules are a large component of life on board for this experiment. The boxcore usually contains a layer of overlying water, below which we find the nodules sitting on several layers of sediment. This water is filtered through a 32 µm sieve in order to catch the smaller meiofauna (<1 mm and retained on 32 µm) that actively try and escape the nodule substrate during the closing of the boxcore on the seabed. The nodules are subsequently collected, washed, counted, measured, and weighed. Each nodule is then preserved in formaldehyde in order to maintain the structural integrity of the animal’s body form to identify them by morphology in the lab. Several nodules are also preserved in ethanol to maintain the structural integrity of the DNA such that following studies of genetic connectivity can be conducted.

Could fake nodules work as a restoration method? Restoration actions to restore ecosystems are already established in shallow waters – think for example about coral transplants. During the SO268 cruise, we deploy artificial substrates for faunal colonization to replace the mined deposits (see image at the top of the page). As substrates we provide artificial nodules of different shapes and material, namely ceramic nodules made from deep-sea clay and from commercially available clay, as well as natural nodules as control. Over the coming years we want to study the suitability of these substrates for restoration after mining impact. Also, these experiments will help us to understand growth rates of sessile fauna. We will have to be patient. Due to expected low animal settlement and growth rates we plan to recover the substrates within the next ~30 years.