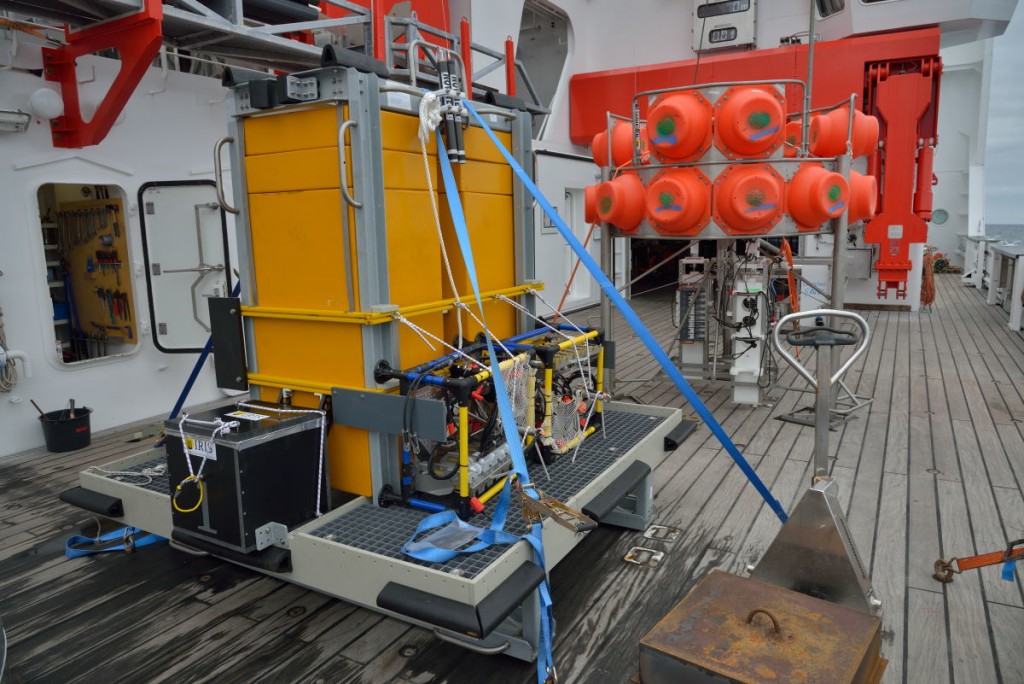 Since the ROV can only carry a limited amount of extra weight, deep-sea elevators were developed to carry tools up and down to use the dive time of the ROV more efficiently. (Photo: M. Schulz)

Our ROV (remotely operated vehicle) substitutes our eyes and arms at depth, but the amount of instrumentation it is able to carry (the so-called payload) is limited to the available space and weight of the payload in water since the ROV is kept buoyant by its own floatation (the yellow syntactic foam on the upper part of the ROV). Every additional load has to be compensated by using the propellers (or thrusters). They are very powerful, but stir up the fine sediment producing big clouds if they have to be used to carry additional payload. On this cruise, we have many different tools which have to be handled by the ROV. If the ROV had to carry them one by one to the seafloor and back to the surface, much of its dive time would have been used just for transportation. Deployment of the elevator with launcher on top during night time. (Photo: Johannes Lemburg)

Therefore, Ralf Schwarz (GEOMAR) developed two landers, which are used as a lift for additional payload. The second one was especially built for SO242-2 to handle the large amount of tools we want to deploy at the seafloor – it can transport more than 200 kg of payload. We call them elevators since they bring scientific instrumentation to the seafloor, where the ROV can use it as a toolbox and return it after they have been used. We deploy these elevators with a launcher which carries cameras and has a cable connection to the ship’s winchfor online video control, which enables us to separate and deploy the elevator at a spot very close to the work space of the ROV.

The elevator at the seafloor, loaded with a large respiration chamber and two profilers. (ROV KIEL 6000)

However, every mistake we make at the surface may cause a problem for the ROV pilots at depth. That’s why, Ralf and me need some time for preparation to come up with a simple solution using a lot of rubber band and ty raps to secure the tools and provide knots (we call them ape fists) the manipulators are able to grip, hold and stretch to bolds mounted on the elevator. Rubber bands with an orange ape fist to hold the tools. (two respiration chambers on the elevator (photo: M. Schulz)

The challenge on board is the organisation of the various scientific tools on the landers – we have various respiration chambers for sediment, macro fauna (like sea cucumbers) and even for manganese nodules. Furthermore, there are profilers with very sensitive, needle-like sensors, which break easily; tricky spring-loaded samplers and sediment disturbance experiments – all delicate, but important tools for the scientists. The effective use of the elevator is based on close cooperation with the scientists who want to use the tools for their experiments at the seafloor. Questions need to be answered as how to organise and pack the tools on the elevators and where to place them on the seafloor. Peter and Ralf with corrals which shall enclose sea cucumbers at the seafloor. “How can they be placed and secured on the elevator?” (Photo: khamann)

After the ROV is done with the tools mounted on the elevator and recovered, we trigger an acoustic release which drops a weight attached and the elevator is rising by its own floatation and picked up by us on the sea surface. The elevator is coming back on deck. (Photo: Johannes Lemburg)

This sounds very easy, but it needs a lot of preparation and careful thinking before we deploy our elevators. We need to know the weight of the tools in water to get the instrumentation back and we have to stow them carefully to avoid that we lose them during deployment and recovery. Especially, the deployment when the elevator touches the rough sea surface is the moment of truth: Are the rubber bands strong enough to hold and did we consider that all air trapped in the chambers can escape? On the other hand we have to consider how the pilots can access the tools, use them and store them safely.

Up to now, everybody seems to be happy with our elevators and we await the next challenges to come… In his free time the elevator is allowed to enjoy the company of the scientists 😉 (Photo: Ralf Schwarz)