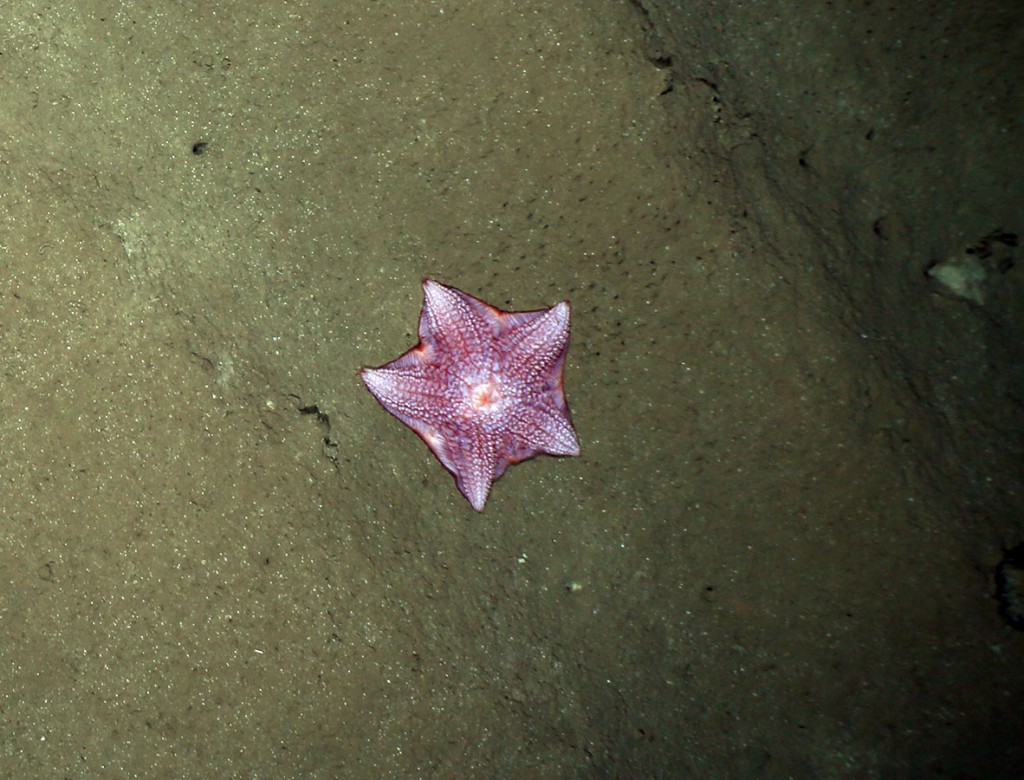 Asteroidea within the ploughed central area of the DISCOL region. PHOTO: AWI

The SO242-1 cruise used an Autonomous Underwater Vehicle (AUV) to visually and acoustically inspect and map the ploughmark traces on the seafloor made by the DISCOL experiment in 1989. During SO242-2 we are using their survey data to plan a series of close up studies of the seafloor using the new Ocean Floor Observation System (OFOS) of AWI, which can be lowered to the seafloor on a glass fiber cable by the ship’s winch and towed across the seafloor to photograph and film the deep-sea life. The device has been deployed throughout the world’s oceans and the latest version can take timed photographs and observer controlled photographs with 23 megapixels, as well as HD video. The DISCOL area of seafloor is approximately 4 km diameter, and in 1989 the actions of potential deep sea mining activities, which will aim at extracting the manganese nodules from the seafloor, have been mimicked in a scientific experiment. The removal of the manganese nodules by ploughing from the seafloor surface (the ploughing buries the nodules deep in the sediment) alters the amount of hard substrate available for bottom fauna to colonize, and also changes the composition and structure of the bottom sediments. Asteroidea within the ploughed central area of the DISCOL region. PHOTO: AWI Our aim during this cruise is to study the long-term impact (26 years later) of the ploughing activity on the biodiversity and abundance of the bottom fauna across the area. To do so we will capture image and video data from areas of the seafloor both disturbed and undisturbed by this ploughing activity and analyze the composition of the faunal community in and out of the ploughed areas. During the first few days of the cruise we have collected 7 hrs of HD video of the seafloor and 1000+ images of the seafloor, covering 9 km of seafloor. In the next few days we will conduct a 4 hr study focusing exclusively on one of the most ploughed areas of the survey region, and look forward to collecting many more hours of data during the remaining cruise weeks – ideally producing a dataset of great use to future researchers and policy makers. 2 thoughts on “Tracking the impact on Deep Sea Life”