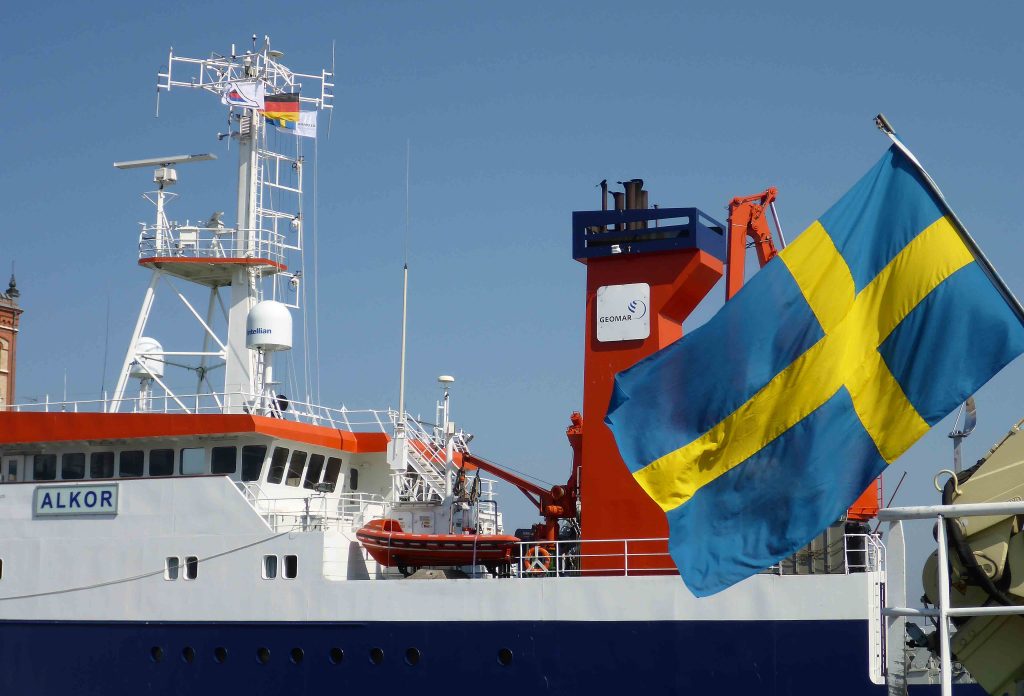 After the fair amount of work on the board and sampling the exciting marine organisms, Alkor brought us safely to Kalmar in Sweden, where two of our scientific crew left and two new participants joined us. For me, as a first-time-on-board-attendee, the arrival at the harbor was a great experience. All our scientific crew went up to the highest deck and were watching Alkor drifting elegantly towards the city harbor. We had an amazing view on the long bridge above the sea, connecting Kalmar with the island of Öland.

Arriving to Kalmar meant one and a half days of relaxation for us. On the first day, we explored the city on foot. It was quite nice to walk further distance on the solid ground. Our cruise leader, Jan, went jogging, and discovered a nice wood heated sauna with a possibility of dipping straight into the cold Baltic – which he did later in the day. At the pier directly next to us, one of the supermodern multi-purpose ships of the Swedish coast guard (emergency towing, oil spill and fire fighting) had tied up, and some of us used the opportunity for mutual ship visits with the Swedish crew. Their bridge reminded us strongly of the bridge of starship Enterprise 🙂

The city of Kalmar is one of Swedish oldest cities and you can admire the beautiful historical buildings, parks and an amazing castle overlooking the sea. Kalmar has about 36 000 inhabitants and they all seemed to enjoy going for chill and picnic to the castle area, sit on the top of the hill and experiencing the view. And so did we. Watching the houndreds of seagulls flying right in the sight below us, collecting branches for their nests was very entertaining. After relaxing on the sun we walked around the castle and admired its historical atmosphere.

The next morning, our scientific gang decided to rent a car and go exploring the close island of Öland. We had planned several spots that we wanted to visit, the weather was definitely in our favor and the atmosphere in the car was amazing. Our first stop was Borgholm castle, also called “Nordic finest ruin”, a fortress built in the second half of the 13th century. While driving around the island, you notice that the vegetation doesn´t resemble the Nordic vegetation, but has more of a Mediterranean look. That is due to dry wind currents and limestone pavement which creates habitat for numerous rare species.

The Borgholm castle seemed quite small from the parking lot compared to what we experienced after we entered the castle. The fortress was really large with a spectacular view on the sea where the potential enemy could be spotted. The exhibitions inside were telling an exciting story of the past to every visitor. It was a really enjoyable castle visit.

The next place that we visited was called Sikavarp, one of the historic nodes in trade across the Baltic Sea. It was a monumental place on a coast of the island and you could only imagine all the trades and exchanged goods that happened at this place in the 13th century. Our last stop was Gråborg castle with a beautiful natural surrounding reminding me of something that Hobbits would inhabit, and a group of very cute goats.

We returned back to our mother ship, Alkor, hungry after a great day in the nature and enjoyed the dinner even more than the days before. It was definitely worth it to visit Öland.

The next morning at 6 am it was back to sea for us, and since then we have been continuing our scientific program in the Bornholm Basin area.

Greetings from on board ALKOR,
Silvia and the scientific crew of AL521

One thought on “Land, ho! Kalmar!”