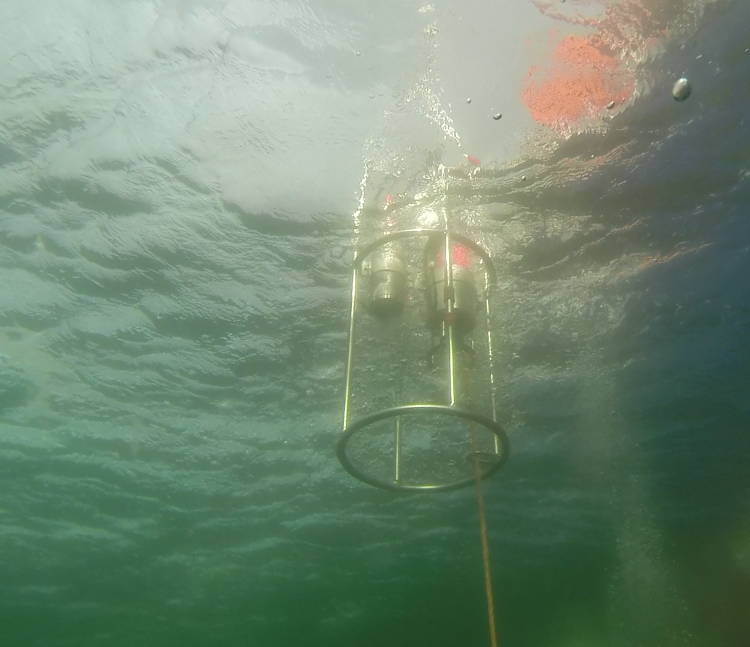 CTD probe in the surface layer at the beginning of a profile. Photo: Burkhard von Dewitz

Hi I’m Burkhard a PhD student at GEOMAR. I’m doing my thesis on habitat sensitivity studies in the Baltic – coupling physical oceanography with biology. This is my 9th cruise of this type and I want to tell you something about the life giving oxygen in the Baltic Sea. Within our integrative time series of the Baltic the oxygen condition in the deep basins is a key research question. As stated in the previous post “Why?” we explore the situation every year with vertical CTD profiles and towed CTD Transects. Before 1984 there were regular inflow events of high saline oxygen rich water from the North Sea every 2 to 4 years. But after that climate conditions required for the lateral transport into the Baltic Sea became rare. Seldom water masses where large enough to replenish the oxygen in the Bornholm Basin or even further east. On top of that the increased nutrient content in the water causes a larger bloom of phytoplankton producing large amounts of organic material. When they die they sink to the deep layers where the material is degraded under oxygen consumption which toughens the situation.  This affects all inhabitants of the deeper depths like cod, sprat, flounder and many plankton organisms. Cod eggs for example are neutral buoyant at salinities from 11 PSU upwards and need at least 2 ml/l oxygen in the water to survive. In the last decades during the so called stagnation periods with no inflow event these conditions were rarely met. But also adult cod can withstand hypoxic conditions (< 2 ml/l O2 ) only for a very short time. To feed on the bottom on benthic organisms becomes therefore harder.

This winter though an unusual large inflow event was detected by long term recording probes of colleagues from the IOW (Leibniz-Institut für Ostseeforschung Warnemünde) fixed to moored buoys between Germany and Denmark. This first indication was supported by first cruises to the area and calculations showing one of the largest inflow events ever recorded. CTD profile in the central Bornholm Basin in May 2012 before the inflow event. Temperature, salinity and oxygen content. Figure: Holger Haßlob The CTD profiles that we took during this cruise confirm a very high salinity in the deep parts of the Bornholm Basin up to 21 PSU. In contrast to the maximum recorded in the last years of 16 PSU. Together with the high saline water large amounts of oxygen was transported to the Basin promising a good year for cod reproduction. In the crucial depths below 50 m the oxygen content is rarely below 5 ml/l. Further to the east within the Gdansk Deep and Gotland Basin our data did not yet show this effect, but at the eastern opening of the Stolpe Trench – the area connecting the Bornholm Basin to the eastern basins – we found a thin 6m layer of oxygen rich water underneath the old water masses. The transport will continue in the next weeks and there is a good chance that the bottom surface in front of Danzig will have the chance to breathe again for the first time in decades. We will resample these areas during our next cruise AL457 in May and are keen to see if a sufficient amounts of oxygen will reach the deep parts in the east.

Reproductive processes of cod, flounder and zooplankton, which depend on good oxygen conditions, are only starting this season. Time will tell if they are able to use this favorable event to their benefit.